Hello everyone. New member here. I’m starting to get back into bonsai, but on a more serious level. After watching Ryan’s videos on YouTube for about a month now I’ve finally become a member and purchased my first piece of nursery stock. Having trouble with making my first design choice. I’m leaning (pardon the pun haha) on the tilt to the left. Also, when looking for the flair it was hard to tell if I should keep going down or if I’ve hit the widest point. Thoughts?

I really like it when its tilted to the right

i think the nebari is stronger on the left hand side (from the chosen front), so the tree looks able to push the asymmetry of the trunk-line (and possibly apex) towards the right. Whereas when tilted left, there doesnt appear to be the strong roots to provide visual stability.

If you havent seen it watch this stream:
https://live.bonsaimirai.com/library/video/design-fundamentals

I think youve definitely hit the maximum flare on the front and left, not sure about the smaller roots to the right, but it might not be worth digging them out. Maybe try a thin bamboo probe to see if theres a big lad under there?

Tis a nice tree though. Make sure your planned work will be season appropriate. Good luck and keep us posted.

I also prefer the lean to the right in the two pictures you posted. My gut says you’ve probably hit the widest point. You could always probe a little further, but that looks like as good of a flair as you are going to get.

Thanks for the reply. I played with it a bit more and with the tilt to the left I started to feel like I wouldn’t be able to get enough of the crescent motion I’d like which would just bother me. That said, I tried looking at it from the opposite side. Tilt to the left, but more in tune with nebari. Basically mirror image of the tilt to the right pic. I’ll post a pic when I get back home. I get more motion with that position, but the base is not as nice. I also would let go of the little shoot at the base. It becomes too vertical in that position.

I only plan on doing the structural wiring at this point. I’ll hold off on pruning until the fall. Repotting in the spring?

I actually had just finished that video before posting. I thought I had over cleaned and freaked out lol. Watching the video and reevaluating my plan put me at ease haha. You guys have convinced me to go with the lean with that base. The tree seems to agree as well.

Based on the photos, the tree seems very root bound. It would be worthwhile to enlist a veteran bonsai artist to coach you through the root pruning and repot in the spring to say a large colander to improve air to water ratio. I have found that hinoki are very sensitive to root mishandling and require a more experienced hand.
I suggest that you purchase some disposable trees before hand and practice root pruning on them to get a feel for it. A word to the wise from me to you is that when you are raking the roots remember that your fingers are the most sensitive tools you possess. You will be able to feel the roots breaking or giving way with your fingers long before your root rake.
Also, remember what Ryan says about the first repotting. The first is just to reduce excess and plant into bonsai soil, not to try and repot into the smaller pot. Let the tree acclimate to the new soil type and thrive before you try to force it into a smaller pot. The key word is always thrive! The smaller pots come later with time and patience. IMHO

Thanks for the advice! It is definitely root bound with bigger roots at the perimeter. My plan was to put it into a relatively large “training pot” with most of the root ball and soil intact. That way I can let the shein (sp?) develop on its own instead of trying to do a wholesale swap to bonsai soil. I’ll look into the type of pot you suggested.

I haven’t looked into local bonsai clubs yet, so idk if I’ll be able to find a helping hand. I just figured that I had enough time between now and repotting time to figure it out lol. I’m on a constant hunt for new trees, so hopefully I can find more forgiving plants to practice on first.

Okay, here’s more comparison picks. I’m kinda liking the lean to the left, but the nebari isn’t as nice. 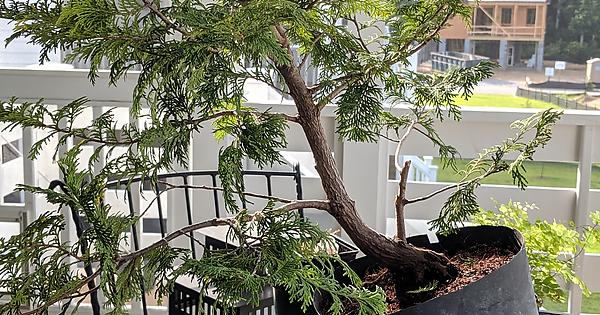 The trick always is to tease the perimeter roots out so that when you put it in the training pot with the new bonsai soil it will allow you to chopstick the soil down in the voids to start its new home. If you haven’t separated the roots enough, when you chopstick you run the risk of damage again. Always rule on the side of caution. When you are root pruning beforehand, note the gaps and vacancies that you will need to fill with soil later during the potting. And always make sure your tree if firmly held ( wired) to the pot, nothing damages roots more than a tree that “wobbles” in its pot.