When you're out @ the nursery watch out for these guys

Here in Washington invasive snails are becoming a problem… Ask me how I know.,…
https://www.heraldnet.com/news/the-slowest-invasion-non-native-snails-take-over-the-northwest/##targetText=The%20Pacific%20sideband%20(Monadenia%20fidelis,snail%20during%20the%20mating%20process.
When we lived in our previous house I brought home a plant from a local nursery, and noticed a snail on the pot. I thought (mistakenly) “oh it must be a tropical snail” being familiar with the native varieties and this one was clearly not local. I thought it would die when winter came… so I let it live. BIG mistake. In a year I had snails everywhere; the lawn, the deck, side of the house, the shrubs. It was so bad that I was afraid of bringing them with me to my new house and left what I could part with there. What plants I did bring I put in the “ring of fire” I placed them on a covered concrete patio, watered as little as possible, and put a solid ring of slug bait around the pots and scattered in the pots also. The article says that some baits only paralyze snails and that they will never eat it again, but I have also heard that slugs and snails cannot cross the bait without absorbing it. I do this with every nursery plant I bring home now. It’s been fairly successful. In the 5 years we’ve lived here I’ve found about 4 or 5 snails that I quickly dispose of. 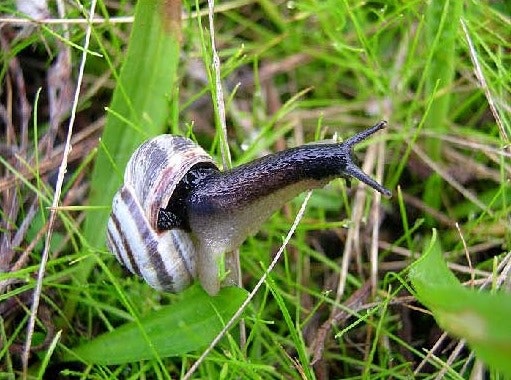 The Port of Tacoma has been waging a slow war against (wait for it) a snail.

I have been here 22 years. Eastern Wa state. Dry side.
In the last 5 years, I’m seeing 6" slugs… I think they are native…? However my vegetable garden suffers. Oddly, they like horseradish leaves.
They like the moisture around my bonsai. Not seen any damage I can attribute to them. Find them mostly in winter storage in the spring. Call ducks make quick work of them! Chickens, not so much.
Almost all of my pots are on benches. Cinder block stands. May be a reason. I’m having more (horror) with the plethora of odd spiders , eating the mites, living on the biogold…
.
Be aware the snails DO carry BACTERIA and PARASITES that cause several NASTY diseases.