What would be a 5-needle pine on Mt. Hood?

Hello all. I just collected some seedlings of 5-needle pines up on Mt. Hood at around 3400 ft elevation, in a clear-cut among lots of larch seedlings coming up with them. Does anyone know what species of pine they might be? I’ve tried googling “5-needle pine species native to Oregon,” but have only gotten unhelpful/confusing results.
Thanks in advance!
Mike

Any pictures of the needles?

P. strobus (Eastern White Pine) is found on the eastern half of North America and is unlikely to be found on Mt. Hood. 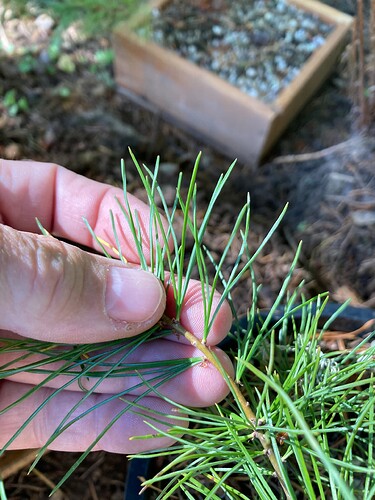 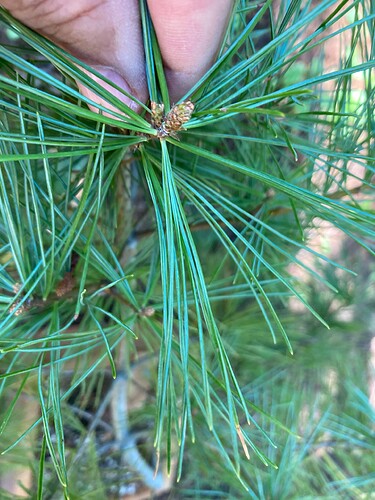 IMG_07071920×2560 434 KB
Thanks nmhansen - took me awhile to figure out how to upload the photos.
I doubt it’s a sugar pine (lambertiana) based on the range being more confined to southern Oregon and CA. Western White Pine (monticola) or Whitebark (albicaulis) sound right distribution-wise. I would guess not whitebark because elevation was fairly low for whitebark, and the needles of the smaller one are rough when stroked from tip to base, consistent with western white pine. I had assumed that both the smaller and larger seedlings were the same species because they were right in the same place, and I figured the longer needle length on the bigger one just reflected the seedling/tree being older/bigger. BUT, when I stroked the needles of the larger one back from the tip, they were smooth, which would suggest that one might be a whitebark. These seedlings were everywhere in this clearcut, mixed in with larch growing everywhere as well. I just find it very unlikely that western white and whitebark pines would be growing in the same place like that, but the needles are definitely different … puzzling.
2 Likes
Roby64 June 21, 2022, 11:29am #6

This is a pinus strobus.

It is a Western white pine (Pinus monticola)

I found two western white pines on the west side of the Cascade mountains in the Mt Baker wilderness a few weeks ago. I thought it was strange they were growing there.

I dug deep on this one.
I agree with Mr MtBakerBonsai.
.
I purchased 10 Pinus monticola from the local conservation district, guaranteed to be 2+ yo P. monticolor… sprouted in North Idaho by a government licensed nursery…
Last years needles look NOTHING like the above. Solid chunky dark green circular needle, 5 needles per sheaths, no white on underside. The contacted authority said— “there is always some variation in nature…”
.
I collected several saplings in north central Idaho last fall (in a roadbed, so would never survive…) that look exactly like the yours; and exactly like what I think P monticolor SHOULD look like.
.
I scoured my (significant) personal hortocultural tree book sources, AND looked online. I did not see a single sitation that did NOT match what you show above, to be— western white pine… P. Monticolor.
…!!
NEVER MIND… Just went out and looked at them, first time in weeks. The new, almost hardened off, growth looks exactly like they should… .Go figure!
They are crazy healthy 5 needle pines… western white pines, P. monticolor…
They each put out 4-5 8+" new shoots. Backbudding on the main trunk, too…!
.
Oooh well… live and be amazed…
Bonsai On.

Thanks Kurt. So the one thing I can’t reconcile is the lack of coarseness evident when stroking the needles from tip to base, on the bigger sapling (should feel coarse if western white pine), while the smaller specimen DOES express that feature (that is, it is distinctly coarse when stroking the needle from tip to base), yet they were growing side by side with each other, and you would think they would be the same species. Could the larger sapling simply be showing an atypical variation in needle conformation, like you noted in yours, and it is in fact a western white just like the smaller sapling/seedling?
Inquiring minds want to know …
Mike

Maybe the non-serated needled pine is a whitebark pine…
They both grow there…
I suppose you could wait for the cones?

.
You will be safe treating them the same for bonsai culture!
(If you REALLY want to know, have a dna species typy done… couple of bucks…)
.
Just did some trimming on mine. Have two new bonus seedlings that came with! Now Ill have to figure what they are…

Thanks to all who replied!