Hey Mirai fam! I purchased a coast redwood from Bob Shimon a few weeks ago at the Pacific Bonsai Expo and I’ve noticed a fungal problem starting to develop. It seems like all the new foliage is turning brown then gets fried. A few pieces of foliage that have hardened off have it as well. I want to get ahead of it because I purchased one from him in February in Oakland, it had the same issue and was dead by May. At the time I chalked it up to over watering (he keeps his redwoods in a river sand mix, it stays very wet) but I’ve been extra careful with the new one. I’ve only watered it once in the three weeks I’ve had it.

I reached out to Bob as well as some fellow American Bonsai Association of Sacramento members for some advice. Bob said try a fungicide and see how it goes. My fellow club member said they had (tree died) and are having a similar issue with a redwood but have not been able to rein it in. It appears to be a root issue. Her teacher Peter Tea recommended subdue maxx since it seems like a root issue. I applied some danconil, subdue maxx, and Cleary’s 336 granules today and am hoping the combo knocks out whatever it is.

Has anyone else had this issue? See below for pictures.
This is the one I currently have: 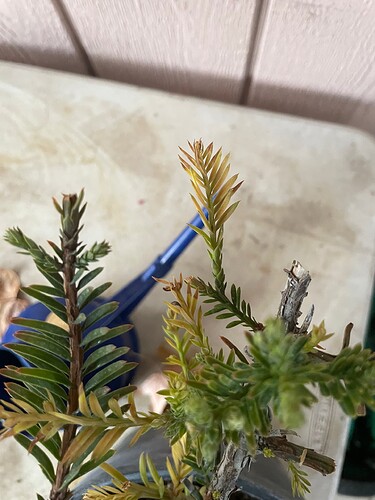 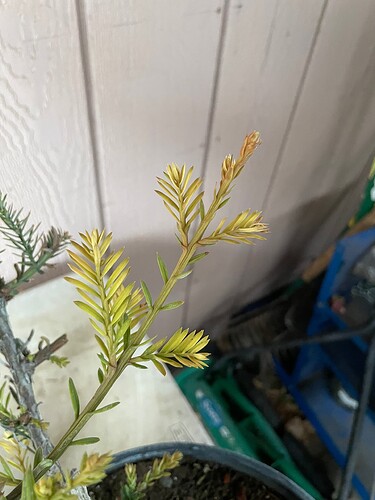 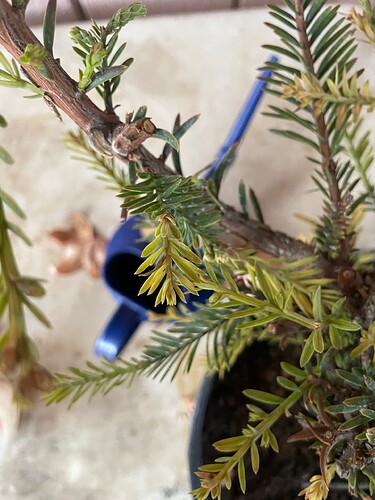 Any advice would be a life saver! I really hope I didn’t end up paying over $600 for two stumps this year LOL

I have bought a few trees from Bob, great trees but if you don’t live in his coastal climate, I have had trees turn just like yours. I have found that his soil medium needs to be changed out in the first spring in new climate. I have repotted with 2:1:1 and that solves it with, as Ryan would say, balance of water and oxygen. I don’t think you have a fungus, and if you do the underlying root health is the “root” of the problem.

You’re right, It’s definitely a root issue. From reading descriptions of diseases redwoods get, it looks like phytophthora. I asked Bob if I could get away with a repot now and keep it in an enclosed patio area, he recommended I wait until February.

I’m seeing it pop up on my other redwoods too. I didn’t keep them far enough apart. Two are planted in a 1:1:1 mixture and two are in straight akadama. 2 trees from both soil types are worse than the other in the same soil.

Looking at old pictures, one tree I’ve had since December 2020, had a similar issue when I got it. It was in a 1:1:1 soil, it’s now in akadama. I let that one get considerably more dry before watering and it seemed to bounced back in spring. But right now it’s one of the most fried looking ones!

At this point, my plan is to continue spraying every week/applying cleary’s, really watch the water, and hope for the best!

Have you checked for spider mites or other sucking insects? That could be what’s happening and could also explain the spread to other trees.

I have checked, thanks for the advice! I didn’t see any signs, there are a few other pests that are attracted to redwoods and I have yet to see any evidence of them as well.

Have you tried using the hydrogen peroxide therapy when you do water to flush the soil with oxygen? My not solve your issue but could be a treatment to get you to a repot?
3Tbsp of 3% hydrogen peroxide to 1/2 gallon of water, water as normal.
Good luck, I’ve seen similar coloration on my red woods, likewise have no definitive cause. Mine are from liners, hoping they acclimate to my climate from seedling stage.

Thanks Kyle!
I tried that with a previous redwood and I’m pretty sure it killed the tree. Not saying it doesn’t work, but I’m just hesitant! I know it’s worked great for a lot of people

I ended up repotting into a redwood box with a 1:1:1 mixture Monday the 12th. I have it in an enclosed patio that gets decent sun, in a cheap $30 “greenhouse” and on a heat pad. So far so good! The parts with the worst of the issue have died but the rest seems to be doing quite well, buds are even swelling a bit. I didn’t trim any live roots but was able to get rid of a good amount of dead ones.

I plan on keeping it where it is until my others start growing in spring, then move it outside. In another week or two I might treat with some Clearys 336 granules.

The substrate needs to be watered about every 3-5 days so I’m guessing the heat pad is allowing for some root growth.

Only time will tell. Wish me luck!