What's your favorite watering can?

I plan on collecting rain water and I’m looking to replace my cheapo Walmart can that I bought to water my “normal” pots to water with. It splashes water all over the place when full and the stream is a bit too strong. I can’t find much out there that’s better than a Haws can. Is it worth the money? Alternatives?

While we’re at it, what wand do you use on your hose?

I have a Haws watering can and it’s pretty great. I have the 5L Long Reach can, which works great. 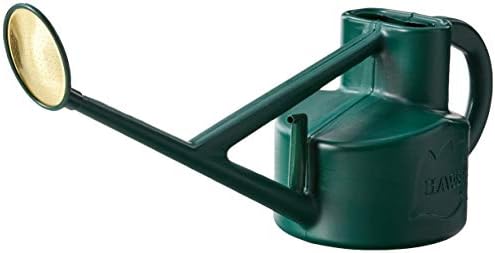 For my watering wand, I use a Dramm One-Touch Rain Wand. It’s a little too powerful at full blast, but otherwise I like it.

I have been using Dramm watering cans for twenty plus years. Love them. They also have a lifetime warranty, or at least they used to.

That’s the exact can I was looking at on Amazon, so that’s good. I have basically the same wand lol. Mine has a squeeze grip vs the thumb control.

Any links or brand names?

Ryan told me earlier this month at Pines I he swears by this Dram head. Naturally, I bought one. Couldn’t find it assembled with wand and handle so had to buy another dram wand and replace the head. Note: this head doesn’t work with telescoping hoses that expand, only hard sided hoses. See amazon reviews for more info.

Here’s the wand I bought and replaced the head on:

And the trigger handle:

the wand is Ichihana
Dramm looks good too and is probably better suited for larger scale commercial use.
the can is http://www.negishi-joro.co.jp/ (Kaneshin has similar, they only do watering cans in a small ws in Tokyo)
Besides the trace elements argument for copper my take is you need a very fine spray head to create a soft application.

My watering can is an old school 13L galvanized can from the first half of the 20th century. It has a long spout and a fine apple with a wide spread. The head is mounted upside down.

The hose has a budget hose head which can create a fine mist or a heavy mist along the usual streams. I bought it in Germany more than 10 years ago for like a tenner and it’s rock solid. I think it’s from Torq, I’ll need to check.

Ordered the Dramm. Thanks for the info!

Used the 1000 hole Dramm 1000PL Redhead Water breaker nozzle on just about any watering wand makes a huge difference. The Dramm wands are also very good and I use one for my main area. I have a cheapo with the 1000PL in the growing area.

I don’t have too many trees (yet) but I think the new dram head will cut watering time in half which is a solid win.

Got the Dramm in today. Did a side by side with my current wand head that has 660 holes. The Dramm looks like it puts out a “puffier” flow of water. Looks like more water even, but when I put my hand under the stream I could tell that it was a softer flow. My only issue is that the head it’s replacing is metal and the Dramm is plastic. Other than that I’m happy with my purchase.

Cool I think I’m going to upgrade the head. Mine is 400 holes right now (I think) and while I’ve learned to live with it, 1000 holes sounds nice.

My problem with the Dramm 1000 head is the performance at the low end of the pressure/flow range. It needs a minimum amount of pressure to not burble out the bottom, but at that pressure it is already putting out a bunch of water that will disturb my top dressing and push soil over the edge. I end up having to turn it on and sweep it back and forth over my trees to not overwhelm the soil. 90% of the water ends up on the ground. Maybe if they had that same hole size of the 1000, but with a nozzle half the diameter?

I try to use a watering can for all my trees as it is less wasteful on water and here in the UK water is expensive. I use a water butt for my azaleas and most of the others when I can. The only time I use a hose is when it has been impossibly hot and it would take me a fortnight to water all the trees in one go (300 at the last count!!).

I had a similar issue with the Dramm redhead (1000 holes) in the UK. It was good, but not as good as it should be. My water pressure is decent, but for normal residential houses in the UK I don’t think the bore of the water pipe is as large as the US (or as large as UK nurseries, garden centres etc. can have). I tried the Dramm yellowhead (750 holes) too, but it wasn’t much different. I think it’s also down to the Dramm wand itself being larger bore so the pressure drops going from smaller to the larger pipe diameter before it hits the head.

I’ve found that the Kaneshine “Kyozen” to be the pinnacle of watering wands. It’s insane. 1261 holes (of 0.18 mm) in a tiny 22mm diameter mesh. Beautifully fine rain and a tiny head means small and agile to get between and under canopies.

But I missed the variable control of the Dramm wands! The Kyozen has a simple tapered copper pipe to push a hose onto. It was all extremely well crafted, so I did this with some guilt but I cut that off, cut down another brass fitting and brazed it on instead. Then I could use the Dramm OneTouch for precise thumb control. Best of both.

I use a Karcher pump with a remote to pump my collected rainwater to this wand. 4000lph and 4.7 bar so through the Kyozen it’s as good as mains pressure.

For watering can I use a Haws 4.5 litre long-reach metal can. I’ve tried various Japanese nozzle upgrades on it but I’ve found they all get blocked pretty easily since I only really use my watering can for organic ferts and additives.

Used the Haws can today for the first time. I love it. Nice gentle flow. Spread is a bit wide, so some water loss on smaller pots…which most of mine are. That’s being super nit picky though. It’s a great watering can. Maybe I’ll drop some copper pipes into it for trace elements.

After using the Dramm for a bit I think I’m going to return it. A full pressure it works great, but at low pressure it just pours water and it doesn’t actually have a spray.