Thank you Randy Knight for saving this White Spruce

Long back story here but when I got this Costal Canadian White Spruce last year from someone who collected it from a friend’s property I was certain it was a goner. It has struggled along for a about a year taking one step forward and two steps back, and then after watching Randy’s stream I went out that night and bought some animal bedding wood chips and some weed cloth and followed his instructions. Three months later the tree has stabilized and I’ve just reported it in a heavy pumice mix.

Most of the tree was dead long before it was collected (lived a hard costal life) but you can see that it lost several smaller branches and all of its older needles, and just kept the newer growth on the tips of a few branches. After three months in the wood chips, it finally stopped dropping needles, the color of the remaining needles improved, and it even pushed a little bit of new growth. I realize it’s not out of the woods yet (sorry, couldn’t help the pun) so I won’t work on it next year and just let it grow, and maybe not even the year after that. But I’m so glad this tree survived, I think it’s going to be an epic bonsai.

What made you want to repot it after only 3 months instead of letting it go through a longer time in the bed? I currently had a tipped over California Juniper that I did this to as well. My plan was to repot it in the early spring and let it grow out during the fall/winter.

Our falls and winters here (outside Seattle) can be so wet that I needed the ability to move the tree to dryer areas. It had already grown some new roots and by getting it in the box now with some good soil my thinking was to give it time to establish itself before winter hits.

Thank you for directing me to this Randy Knight episode which has so much information.
I hope you will both let us know how your trees have survived the winter and how they continue to develop in 2020.

Recent research has proven that trees in a forest are able to nurture and support one another through the symbiotic association of mycorrhiza and roots. Without knowing how close your wood chips are to mature trees, it is difficult to say if the mycorrhiza from the trees is invading the chips and supporting the bonsai recovery or if it is from mycorrhiza developing within the wood chips.
My theory is that the larger the network of mycorrhiza with maximum connection to the potted tree, the stronger the recovery.
We need to develop opportunities for our isolated bonsai to benefit from this magic.

An update on my California Juniper, I have these photos and just repotting it about a month or two ago. 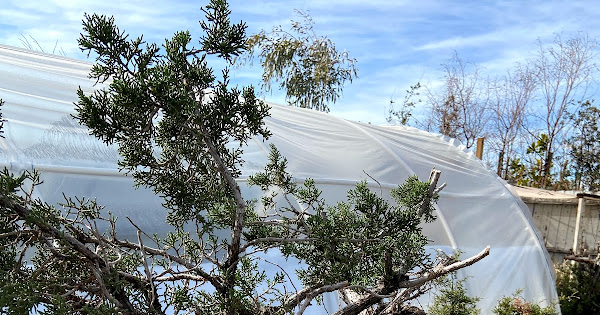 @Tac - how did this tree go - I would be very interested to see if it had back budded as I have an issue getting backbudding on a white spruce.

The tree ultimately didn’t make it. I’m not actually sure it was a white spruce, the more I learned I think it was a Sitka spruce - which have no problem back budding.