Netpot and attaching a tree to a wooden plank?

I have recently stumbled accross a presentation of Peter Warren for Bonsai Focus on YouTube. At the 0:48 mark, Peter is attaching the tree onto a wooden plank and potting the tree and the plank into a net-pot-ish container. Interestingly, the plank’s size seems to be equal of the container’s inner measurements.

Now, I understand each of the techniques applied in this demo on their own: the plank forces the roots to spread, thus creating an even and good nebari, while a container like this provides good aeration, thus encouraging good root growth.

What confuses me, though, is combining both techniques and the plank’s size: isn’t the plank contradictory to the concept of drainage and is it behaving more like a barrier for air circulation in the container? Also, will such a large plank create an imbalance of water and oxygen in the root system, since it will not drain beyond the plank?

Dont get me wrong, please: I am convinced Peter knows what he is doing. I just want to understand the combination of the methods, since the demo does not privide any commentary on this,

As always, I am looking forward to the discussion with you

Tilt the container up 1" on any of those sides and all of those issues would be resolved. Most of the water will drain though without a tilt. Water always finds a way. Air in a container is, as I understand it, “moved” when you water. It’s not necessarily freely moving through the pot. I’d love to get my hands on that crate they’re using. It’s basically a rectangular colander.

The plank probably isn’t a complete barrier since it will absorb some water and let it pass through to some degree (on top of tilting or whatever other tricks can be used).

I bet watering is somewhat trickier with the plank in there though, and will take careful monitoring while the new roots are developing.

I have a few plants in pond baskets with roots sitting on top of a tile that barely fits in the basket. I even have a basket with saplings inserted into a hole in the tile. Watering hasn’t been an issue. By that I mean that I don’t have to treat them any differently. Watering, in and of itself, is always an issue for me lol.

Yeah I meant slightly trickier, not like super duper tricky.

Also, the crate they are using is a produce crate. You can get them at restaurant supply stores or maybe farm supply stores (if you are in a produce or fruit farming area), usually about 2 ft by 1.25ft.

Thanks, guys! Tilting the pot is a thing I did not think about - as often, the easiest solutions are those you don’t come up with immediately…

Also, the crate they are using is a produce crate. You can get them at restaurant supply stores or maybe farm supply stores

Nice. I thought it looked familiar. Thanks!

Thanks, guys! Tilting the pot is a thing I did not think about - as often, the easiest solutions are those you don’t come up with immediately…

Lol, it’s always in the front of my mind because I have trees that I’ve overwatered.

It’s surprising how well it works too provided you give the plant time to recover.

I have been building my own grow boxes for years with solid sides and mesh bottoms for great drainage. I have traditionally used 6 mm (1/4") wire mesh in the bottoms and rot resistant wood (mostly cedar and redwood) from 14 mm (9/16") to 38 mm (1.5") thick. I have switched to 3 mm (1/8") mesh in the bottoms in the past couple of years since I have switched to a finer soil mix and decided I don’t need an aeration layer in these (I line the older boxes with the finer mesh when I use them now). TI have been thinking about how to get the benefits of growing in a colander without the drawbacks of tipping and decomposition of the plastic in the sun. That lead to the type of box shown in the top of the two pictures. It is folded from the 3 mm mesh and has a wood rim around it for support. The mesh portion of that box is 17.8 cm (7") by 22.9 (9") by about 5 cm (2") below the rim. The mesh sided ones don’t look as good, but they are faster to make.

@MartyWeiser - these pots look awesome! How is your experience in regards to developing trees in such wooden boxes?

I fee the trees have developed quite well. One of the important things for me is a good nebari and the shallow container helps with that. I am in Eastern Washington so our summer are fairly warn (highs of 23C/90F+ and low humidity) so the pines and larches do the best, particularly since I have traditionally used a coarser soil mix (3-9 mm - 1/8-1/3"). The maples are doing well in them once I switched to a finer mix of 1-6 mm (1/16 - 1/4") particles. I tried maples in colanders and pond baskets in the past and they dried out too fast in the coarser mix so I am a little concerned about the mesh sided boxes for them. I plan to run an experiment with some of the mesh sided boxes lined with weed block cloth to try to retain just a bit more moisture between watering. For maples I have had very good luck using plastic saucers with several large (25 mm - 1") drainage holes melted in the bottom. The only problem is the roots like to circle around the bottom and they don’t pack on the benches very well.

These are awesome. I build fairly similar boxes, but with pine that I then burn to do some yakisugi. I was thinking about switching to something a bit more rot resistant though. Thanks for the idea to use cedar or redwood.

The plank probably isn’t a complete barrier since it will absorb some water and let it pass through to some degree (on top of tilting or whatever other tricks can be used).

@nmhansen I had that idea of drilling holes into the plank, just like Troy does when buidling the yamadori pot in the yamadori potting video. Would such holes make sense?

Maybe? I’m not an expert and haven’t tried this technique at all.

But, thinking out loud, roots would escape down them and may get as thick as the hole you drill. You would probably have to cut them off to free them from the board when ready to transition the tree to a real pot. May not be that big of a deal since you’d probably cut off a lot of those roots anyway.

I finally found something that might be an alternative to an anderson flat. I’m not sure how sturdy the plastic is though. If someone gives these a shot please report back. Since I put all of my stuff on a bench I’m still going to go with building grow boxes with mesh bottoms. 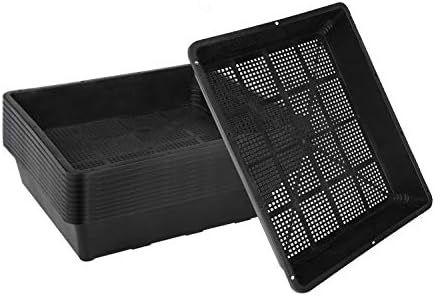 As I understand it the reason to attach the tree to the wooden board or any other flat surface to to force the roots to grow in a flat plane. The problem I have with using a large flat surface in a constricted growing location such as a pot or grow bag is that very little water gets in under the flat surface so very few roots grow there - it is wasted space. I have seen it in my own trees where I am trying variations on this theme.

What we need is a rigid flat surface that allows water to pass, but inhibits downward root growth. I am going to try using the plastic grid for in-ceiling fluorescent lights covered with weed block cloth next spring. The grid is about 1 cm thick and the grid is about 1.3 cm square so it is fairly rigid. ![Light Cover Grid|375x500] (upload://3ggu8rECWVCKYqIsEY27poyyfAB.jpeg) It has lots of tie down locations and a large sheet can be stiffened with rebar underneath. I anticipate it will hold up for a few years underground.

When placing a seedling through a hole in a tile or solid plate to girdle it and force spreading roots you can just cut a hole in both the weed block cloth and the plastic grid for the seedling roots using a small plate (or plates!) that allow water flow to the old roots below… The new roots will grow out over the plate and then start down where they will run into the weed block cloth. If the plate is thin (I like to use acrylic for windows that is on the order of 2 mm (0.080") thick there will be a minimal step in the roots at the transition.

I live in Montreal, Quebec and asked to the local horticultural retailers if they could sell Anderson flats and the answer was no. I also tried to contact sellers on the West coast and would not ship to Montreal. So I am also still trying to find an alternative. Until then I am building wooden boxes like you guys. Maybe I have to import a larger quantity with the local club members.

I like the wood boxes better than the Anderson Flats. You can build custom sizes and use different sized wire mesh in the bottom. The wood boxes are also stiffer so there is less flex and less root trauma. Finally, if well made they look much better.

I bought an 8" plank of cedar yesterday. I’m going to build the raft box for my bald cypress and of course burn it. I’m told that yakisugi cedar is quite beautiful.

image2126×1408 947 KB
I use airpot seed trays. The results are truly great. They’re ideal for rapidly growing on material and are especially useful when lifting trees from the ground as the amount of roots produced allows you to pot up in a bonsai pot after only one year in the airpot. They come in two sizes so will accommodate any size tree. Extremely good for deciduous and most fast growing species. Give them a go, you will be shocked at the results I guarantee it! I also use them when repotting from an ordinary airpot to encourage the roots to grow closer to the trunk in readiness for potting into a bonsai pot.
2 Likes
KurtP October 26, 2020, 2:44pm #20

How do YOU keep the 1/8"_1/4" soil from washing out… I sift my compost,too. I have a hard enough time keeping the surface treatment on!
.
The ceader plank I can understand.