An example of symbiotic tree behavior

I know it’s not bonsai, but I still found this to be pretty interesting.

Undead Tree Stump Is Being Kept Alive by Neighboring Trees

A tree stump in New Zealand is very much alive, thanks to an interconnected root system that benefits both the stump and its neighboring trees. Scientists say this unusual symbiotic arrangement could change our very conception of what it means to be...

There’s a couple of YouTube videos on “It’s OK to be Smart” that talk about the mycorrhizal network of forests. Really interesting stuff.

Odd that it never re-sprouted. Also how is it moving sap into the upper trunk, if it is a closed system? Seem like there would have to be some transpiration to keep capillary pressure up and the water moving. Maybe the ‘bark’ can photosynthesize and also exchange water/gases?

Perhaps it was using the other trees around it to satisfy those mechanisms?

The root systems have grafted together so the stump trees roots have become an extended system for the living foliage tree.

I work in forestry/timber, and I found this book to be really eye opening. I think it would be interesting if Ryan brought Peter Wohlleben on to Asymmetry. 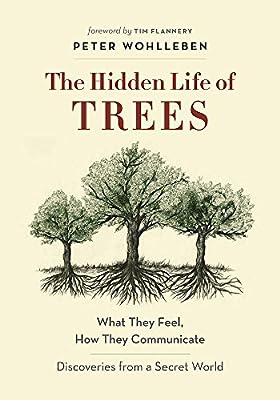 The Hidden Life of Trees: What They Feel, How They Communicate―Discoveries from A Secret World

Thanks for the suggestion. Gonna grab that from the library.

I work in forestry/timber, and I found this book to be really eye opening. I think it would be interesting if Ryan brought Peter Wohlleben on to Asymmetry.

The Hidden Life of Trees: What They Feel, How They Communicate―Discoveries from A Secret World

Thanks for letting me know!! I’ll see what we can do, he would be an awesome Asymmetry guest.

In the May 2018 Deciduous Post-Flush video Ryan mentions his great satisfaction at the survival of the European Beech Forest, including the 2 trunks in the front which flourish after enduring radical root pruning.

Is there any discussion of the possible role of the mycorrhizae from the more established trees supporting the growth of the weaker trees, as Susanne Simard has presented on YouTube?

Is it possible that the interaction of the mycorrhizae between the trees could influence internode length and leaf size as the branching is refined?

Are you aware of any investigative work to harness the synergy of group planting in bonsai?

I haven’t heard him speak to that specifically but I just watched the most recent Live Q&A where he talked about using the mycorrhiza rich soli from one bonsai to help propagate the development of mycorrhiza in another, newly repotted bonsai.

The most note-worthy quote from the lecture I attended:

‘Why do you always assume the trees are in charge?’

Maybe a lot of you know him already but for me the most important authority on mychorriza and Fu ghi in general that is alive right now is Paul Stamets, you can find a lot of lectures of him on YouTube, he even sells spores and mychorriza on his website:

Fungi Perfecti® is a family-owned, environmentally friendly company specializing in using mushrooms to improve the health of the planet and its people. Founded by mycologist and author Paul Stamets in 1980, we are leaders in a new wave of...