Hello all. Really hoping the collective hive mind here can help with this. For the last 3 years or so, I have had branches on some of my dawn redwoods develop darkened, flaking bark, revealing a brown, powdery coating on the underlying surfaces. iIf you wipe off the flakes and powder, you see green cambium underneath. It seems to be confined to relatively young branches, and doesn’t seem to impair annual growth of new buds/fronds. Lacking any direct knowledge of what this is, I have always assumed that it had to be some kind of fungal pathogen (powdery mildew?), and have tried spraying the affected areas every few weeks in the summer, alternating Daconil with copper fungicide (not allowing any spray onto soil), with no apparent success. I have also tried cutting off all affected branches early on, but it appears again on new branches the next year.
I just recently did an online search, and found a thread on BonsaiNut regarding this exact phenomenon, initiated by someone in upstate New York in 2015, who said that he saw some of this in Bill Valvanis’ dawn redwoods (Bill V evidently wasn’t concerned it sounded like), and the State extension service had no clue when asked/sent pictures. Thread continued then, with many individuals chiming in over time, indicating that they have seen this in their own trees as well, but had no idea what it was, either. The most recent activity on this thread was in 2022, still with no conclusion. The views seemed to fall into two schools of thought:

Well - sorry, but I for one simply cannot believe that this is normal. It’s REALLY ugly, and I’m dying to know what it is and how to eliminate it. My next thought was to try lime sulfur dormant spray this winter?

Please, somebody tell me that they know what this is… 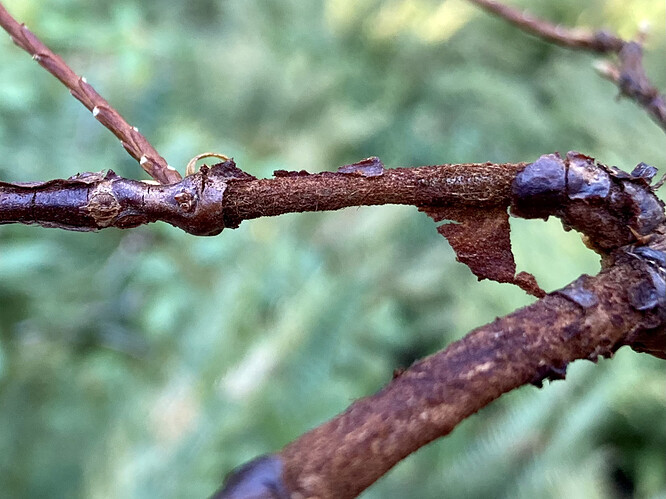 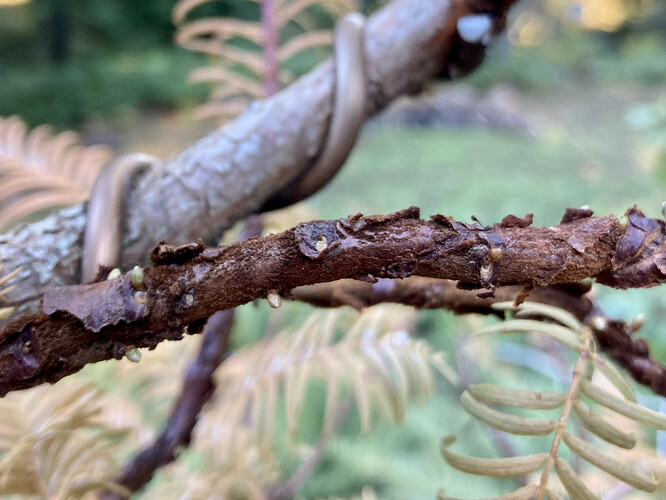 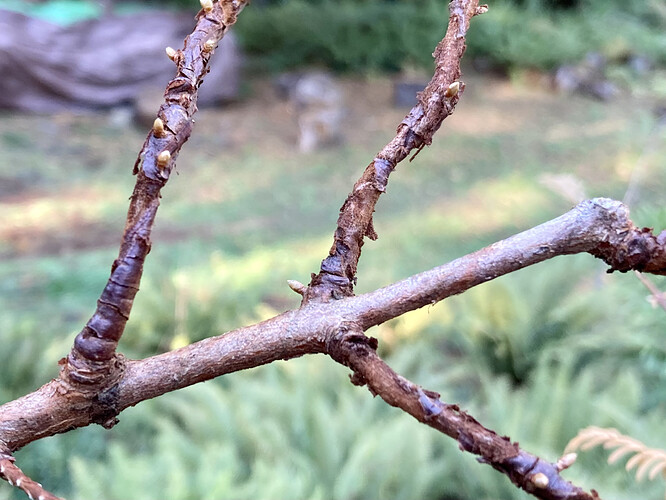 I’m trying to figure out how to attach photos - can someone direct me as to how to post pics?
Thanks

I also meant to post this in the horticulture category, not beginners …

Figured out the photo upload.

Yup it’s odd alright.
I noticed the same thing on a recently purchased dawn redwood. Otherwise perfectly healthy.
Based on what I read, It seems that some individual trees do this others don’t.
It doesn’t seem to spread or infect anything.
Check out these threads.
Some suggests it’s natural and happens only on 2-3 year old branches when they move to a more mature bark, honestly no clue

Dawn redwood bark - what is going on?

Anyone seen this kind of issue on any of their trees? Does it look like a fungal problem? To summarize, I have a number of dawn redwoods that I acquired for a group planting several years ago. A couple of them were planted in the ground to develop...

Does anyone else have this cool fuzzy stuff on their dawn redwoods? Exfoliating fibrous material found on all branches. I have a few other dawn redwoods but only one has the fuzz. It reminds me of the branching of metasequoia honshuenensis; random...

Maybe ask Ryan, he will most likely know what’s going on.

Yeah, it’s totally puzzling. And I just don’t get how, if this is normal, it would only appear on some branches and not others of the same age on the same tree, and does not appear anywhere at all, ever, on other trees. (That Bonsai Nut thread was the one I was referring to, but I hadn’t seen the Houzz thread)
If it were globally distributed across the entire tree in some, and not at all in others, I might be more likely to believe that it could represent genetic variation in bark characteristics, but …
I’m still tempted to try lime sulphur dormant spray on at least some of the branches to see if it changes anything compared to branches that aren’t treated.
As for posing the question to Ryan, great idea, and I’d love to, but how do you get a question to him directly? Does that depend on level of subscription? (I am at the basic level, not premium). Any info on this would be appreciated - I’d love to know what he thinks.

Yeah, there’s a weekly Q&A where you can ask questions but it’s for higher tier members only.
My other thought was that it might be some sort of canker.
Maybe someone will chime in on what it might be.