I need to post a pic of my humble collected grape to get some advice.

I’d love to check out your grape vine, hopefully I can be helpful.

Here it is. Don’t laugh, lol. I collected three. Only the small stump made it.

It has growth at the base of that vine. My plan is to just let it grow out as much as possible this year to start developing something that looks like a trunk haha. I’m super open to suggestions though as I have no idea what I should do with it aside from the Dennis podcast. This is a muscadine grape vine. 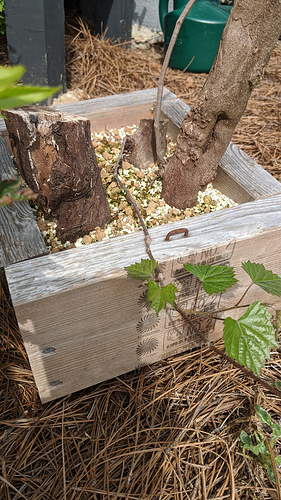 Water, fertilize and wire some shape. No pruning. It will grow fast.

After much deliberation I believe the tree should be styled in a weeping fashion. This is based on my lack of satisfaction for its current design and by observation. It’s naturally weeping! So instead of cutting back today I am posting a photo and will continue to elongate and bring to fruition a new vision for this specimen. Minor update on my little stumps, the tallish slender one pushed out shoots at the base of the vine that it had. Letting them grow, but they seem to want to take over since they’re a vine.

I need to listen to the Dennis Vojtilla podcast again, but do I let the vines run out this year and then cut them back or just let them run for a few years? I’d like to develop the trunks.

If the shoots need to develop along with the trunk I would let run for a as long as possible to attain girth. You can most definitely wire shape in early. I like to do progressive cut backs to achieve taper or just switch to new leader and allow that to take over. Vines will most certainly have several runners so you’ll have plenty of sacrifice branches.

When you’re ready for branch ramification let run until the base of shoot has hardened at the first 2-3 nodes and cut back to that. at most I do 2 maybe 3 prunings during a growing season. In spring when buds begin to swell, I clean up the structure and if needed that’s when I repot.

I like to let mine fruit so, so I let them run until they develop and cut back leaving some clusters. Grapes fruit on new shoots from the prior years growth. Most will fruit on every 2nd or 3rd internode of the initial spring push.

Now that I’ve decided on a weeping design I’ll be pruning 1 maybe 2 times a growing season. I have on several years performed partial and full defoliation to stimulate an additional flush of growth and/or to reduce leaf size. Just remember grapes are thirsty so keep it hydrated! Especially important in Central Texas… If memory serves me correctly you and I live in this region.

Feel free to PM if you got questions. I would also definitely reference the DV podcast, bonsai on!

Here is an example of the leaf reduction I’ve achieved through the combination of pruning and defoliation, which, is assisted by allowing the roots to compact more in the container. I repot every 3-4 years, no akadama in my mix. Lava/pumice/turface/haydite with a little zeolite. The pumice/haydite (or expanded clay) serve the same purpose and they have nearly identical behavior in the container. Base molecule is different and so is the color, top dress that with long sphagnum moss and it’s magic. The top dressing up close, it keeps the surface stable and retains moisture. Fall 2020 update, hard year for my garden Grape Vine Yardadori. Aphids followed by heat and then spider mites, still a lot of work to go. Have 3-4 weeks before it starts to ldrop leaves. Close up view of the trunk and areas of interest. Have to start a yuppy trend. Ultra micro vintages…

I’m all in for that! Grape bonsai are so cool. I saw this chonker at Dan Robinson’s place today.

Impressive leaf reduction!
Is there a specific time to leaf prune so that you don’t get major bleeding?

I haven’t had any bleeding as a result of pruning to date. I perform cut back in spring (March) before it pushes growth as buds swell. I then prune for shape after hardening off, this might be done 2-3 times a growing season. This year it had pre-flush trim and only 1 pruning as I decided to let it run to redesign into a weeping form.

If I want it to fruit I will perform after the clusters have formed. Fruits develop on new growth from the previous years wood. Fruits tend to develop every 3rd maybe 4th internode.

I have the opportunity to jump at about 10-12 vines. I did listen to the Vojtilla podcast but totally forget what he mentioned about collecting. I’ve never dug them and I head they just create a huge tap-root down. Can you just cut them and stick them into pumice like an olive for example? What’s your experience?

I have had success with stump cutting grapes during the early summer, however, I don’t place them into straight pumice. Grapes are thirsty and I live in central Texas so I place them in a large 10 gal plastic bin with no drainage and use a 1:1 mix of pumice or (expanded shale/haydite) and pine bark. Pumice would be preferable but in San Antonio I had trouble acquiring pumice reasonably so the one in this thread was started in expanded shale and pine bark. I have had prolific roots by end of summer using this method. I let them grow freely for the entirety of the year that they are collected. No fertilizer or rooting hormone, just water and do not let the soil dry out. I keep them in partial shade, early morning sun, midday shade and dappled light in the evening.

Good luck with your collecting!

I collected three some time ago. I didn’t have much for roots, but figured I’d pop them into a box for the heck of it. Two of the three survived. I let them pretty much just run free all year. I’ll start pruning this year following Dennis’ advice. Let it grow out 5-7 nodes and then cut back to two nodes.

@ndavila80 @Bonsai_Bentley thanks for the tips guys, ill try my luck then with trying to get whatever roots i can but straight pumice sounds like an option for my location then. Ill give it a shot

@ThomasUrban You could definitely use pumice, you will likely need to water a little more depending on your locales seasonal weather conditions.

@Bonsai_Bentley Dennis’ advice is great for developing ramification, if you have the branch structure in place already (location and desired thickness/girth). It’s pretty standard pruning practice… which is to elongate, harden, cut back to 2-3 nodes. Depending on the variety of grapes, you may not develop many or any fruiting bodies for display. If you want to see the fruit clusters just let it run and after they form, then cut back to desired shape keeping the clusters. You can always regain structure in the fall and the following spring.

My trick to keeping the internodes short is not to fertilize in the spring while the first push of growth elongates. After 1st prune I will apply an 8-4-6 or 5-7-4 to keep the plant strong and growing. If you need to thicken branches just let them run.

I’m having to thicken branches again this year as I am in process of redesign of the plant in this thread. I’m going to apply a light dose of fertilizer all through this years growing season. I will only perform pruning if a branch in a given location starts to gain too much traction. As with all things balance is the key.