Bud break on my European larch!

It’s December 24th and the buds are starting to break on my European larch! I live in the SF Bay area and this is totally unexpected.

I was thinking that I would have a month or two before things started budding out in the garden, but this really pushes up my repotting timetable, as I’m sure other trees can not be far behind.

Even though larch are very cold hardy, watch out for harder frosts that will kill the new foliage. I lost an entire flat of seedlings one year that started to grow during a winter warm spell and then froze during a hard freeze later in the winter. 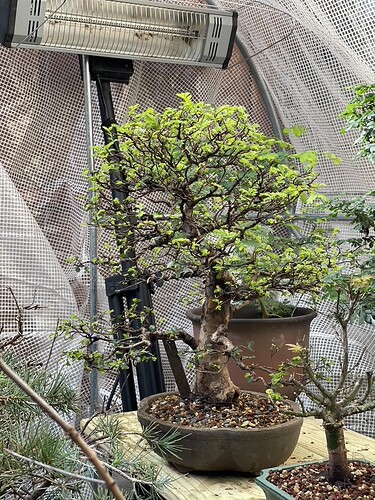 One of my ulmus parvifolia (Chinese elm) trees, and an acer palmatum pre-bonsai that started to leaf out in December. Not an unusual occurrence in Dallas (Zone 8). Once their buds start to break, it is off to the heated greenhouse. In March, I will put them out into the Dallas sun. Both varieties will do well until July, at which point, I will have to put them in shade. By August, they will be in dormancy. October will find them starting to lose leaves. By Thanksgiving they will have lost most of their leaves. And in a warm December, they will begin to leaf out again by the middle of the month. Heavy pruning and repotting needs to happen like it’s early spring. I don’t like it, but I’ve had the elm for about 25 years, and it is what it is.